Easton: Back to His Old Self

During pregnancy, Easton's scans appeared normal. But when he was born, his parents noticed something unusual. Easton's forehead was pointed like the bow of a ship, and the back of his head was elongated.

Easton was immediately referred to Bryant Toth, MD, director of the Craniofacial Center at UCSF Benioff Children's Hospital Oakland. One of the nation’s leading medical centers for the treatment of craniofacial birth defects, the Center provides comprehensive evaluation, therapeutic, surgical, and rehabilitative care for hundreds of children each year.

Easton was diagnosed with craniosynostosis, a rare condition in which skull bones fuse before the brain is fully formed. If left untreated, it can limit brain growth and result in a permanently misshapen head.

Meeting the renowned surgeon, Easton's parents Danielle and Eddie were immediately set at ease. Toth knew exactly how to proceed and had full confidence in a complete recovery.

"I liked having a doctor that knows that he is the best and does not question himself," Danielle says. "He felt Easton's head and already knew the plan of attack to fix it. There was no hesitation."

A coincidence also gave them peace of mind: A family friend had gone through a similar surgery more than three decades previously, with no lasting health effects. His surgeon? Dr. Bryant Toth, who has been practicing at UCSF Benioff Oakland since 1984.

I liked having a doctor that knows that he is the best and does not question himself.

"That showed the passion and dedication Dr. Toth has for treating these kinds of cases," Danielle says. "He definitely did not lack expertise."

In addition to the world-class medical care, the family was also impressed by the compassion, humor, and attentiveness of the entire caregiving staff before and after Easton's metopic suture repair, which Toth partnered on with neurosurgeon Kurtis Auguste, MD.

"All the nurses, the neurology team, the social worker, everyone we've met have all been sympathetic and understanding," Danielle recalls. "They were all very helpful with answering our questions and concerns, and they kept reassuring us that Easton would be fine."

For his part, Easton has handled the whole process like a champ. "We were shocked at how fast he got back to his old self after surgery," Danielle says.

Five-month-old Easton doesn’t even seem to mind his custom bright yellow helmet, which he’ll wear 23 hours a day for six months to help reshape his skull. He’s back at home in Danville with older brothers Emmett and Elliott, sampling solid foods, learning how to roll onto his tummy, and babbling constantly.

"It’s wonderful to see his sweet and strong personality coming out," Danielle says. "This has not even been a setback for him. It’s just a little bump in the road." 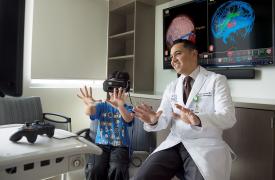