Penelope Yeo was diagnosed with cystic fibrosis (CF) on the day she was born.

Her parents, Julie and Matt, were not caught entirely off guard. They knew that they both carried the gene that causes this inherited lung disorder. But nothing could have prepared them for what came next.

The early days stand out in Matt’s mind: from seeing his tiny daughter hooked up to a feeding tube to watching her suffer through months of uncomfortable respiratory treatments. But Matt also recalls the incredible community that he formed during Penelope’s treatment: the doctors who called on weekends to calm him in moments of crisis. The staff members who cared as much about his and Julie’s well-being as they did about their daughter’s health.

“Our experience at UCSF has been unlike any other patient-doctor relationship I’ve had in my life,” Matt says. “They supported our family in ways that no other doctor, no other hospital, ever has.”

As a major center for CF research, UCSF has led the development of new treatments to correct the defect in the CF gene. In recent years, patients like Penelope have experienced dramatic improvements in their quality of life.

Now 8 years old, Penelope is thriving. She still needs diligent care, but her health has stabilized. Matt says she is a strong, happy child with a knack for storytelling.

For the Yeo’s, their experience has inspired them to keep fighting – not only for Penelope, but for every family affected by this disease. Over the last eight years, they have mobilized their community to raise thousands for CF research and care. 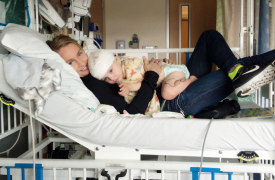 Help us support the families and kids who need us most.
Make a Gift