Marina (left) with her team from the UCSF Benioff Children's Hospital Food Farmacy.

Marina Franco has deep roots in the East Bay.

Her parents – both immigrants from Mexico – met at Berkeley Adult School, and Marina and her younger brother grew up in a low-income neighborhood in Richmond and attended Berkeley schools. It was life in Richmond that first got Marina thinking about food.

"From a very young age, I saw that there weren’t a lot of grocery stores around," she says. "I couldn't understand why there were so many liquor stores in my neighborhood, but around my high school in Berkeley, there was a Whole Foods, a Safeway, a Trader Joe’s."

It wasn't until she was in college that Marina developed a language for this disparity. She learned about redlining, a discriminatory practice where racial minority communities are cut off from credit, insurance, health care and nutritious food. And she gained a deeper understanding of food insecurity, a condition in which households have limited access to adequate food due to socioeconomic status.

"It made me angry," Marina says. "But when I put two and two together, it sparked a passion in me to help my community and communities like mine access healthy food."

That passion inspired Marina's professional journey. In her senior year of college, she earned an internship at the Children's Hospital Oakland Research Institute (CHORI) to explore how nutritious dietary staples impact the eating habits of food insecure children and families. After graduation, Marina was hired as a research coordinator for the same study.

She began to realize the impact that research can have – to not only identify and describe the root causes of a serious social problem, such as food insecurity, but also to explore practical solutions. And she realized the importance of her own role – as a young Latina woman with first-hand experience of the research questions, working directly with people from her own community.

“About 70% of the families we enrolled in the study were Spanish speaking, and many of them had trouble reading,” she recalls. “So I did a lot of translation. I explained the research. I told them – you live in a food desert, and we are doing this study so we can prove it, so we can make it a science. And I realized that my ability to connect with these communities was valuable."

I realized that voices like mine were lacking in the medical field...so I started to think...Maybe I can be a physician scientist.

Marina dove in head first. She worked directly with farmers to learn about the day’s harvest and how best to prepare each item. She shared this information with families and helped them think through how to integrate new foods into their daily diets. And she served as a recipe messenger: learning one family’s favorite recipe – for example, for preparing collard greens – and passing that recipe on to families for whom the food was entirely new.

"I love this work. I love talking to people about food. And I learned that it's not enough to give people access to food. It's also about education. A lot of these people are immigrants, like my parents, coming to a new place, without roots. When you are surrounded by packaged, low-quality, high-sodium, high-sugar foods, you can forget what your diet used to look like. You need to relearn how to eat well. And having people like me involved in this work – people who understand that – matters."

For Marina, the experience of translating her passion for food justice into research and then direct action has been eye opening. "I realized that voices like mine were lacking in the medical field," she says. “So I started to think... hey, maybe I can do this. Maybe I can be a physician scientist.”

Earlier this year, Marina decided to leave her position at the Food Farmacy to study full time and apply to medical school. She isn’t sure what she wants to practice yet, but she knows that food will play a role. “Because food is medicine,” she says.

When asked if UCSF will be on her list of schools, Marina says of course, she would love to stay connected to the university that inspired her career. She also dreams about bringing her skills back to Richmond and helping communities like her own eat well and thrive. 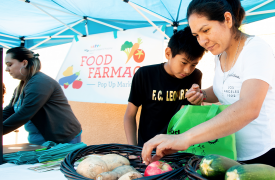 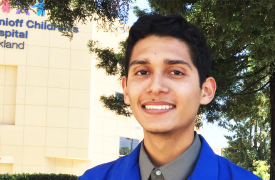 CHAMPS: A Pathway to the Future

Together, we can amplify our impact.
Make a Gift