One family’s harrowing fight for their child’s life

Just before her first birthday in January 2020, Rory’s parents, Patrick and Lucy, heard the word no parent ever wants to hear — cancer.

Rory was diagnosed with a Stage IV metastatic Wilms tumor, a rare pediatric kidney cancer that affects fewer than 1,000 children in the U.S. each year. The grapefruit-sized tumor on Rory’s right kidney couldn’t be operated on safely, and it had spread to her lungs and into one of the veins leading to her heart.

Fortunately, the family lived near UCSF Benioff Children’s Hospital San Francisco. Rory’s team of doctors began treating her with a chemotherapy proven to work on 90% of Wilms tumors. The goal was to shrink the tumor enough that it could be surgically removed.

After three weeks of treatment, however, Rory’s condition continued to decline and her tumors actually grew. Her cancer was much more aggressive than her doctors first thought.

The team immediately switched Rory to a chemotherapy regimen for anaplastic histology Wilms, the most aggressive type of the cancer she was battling. This type represented less than 10% of all Wilms diagnoses, making it even more rare than most Wilms cases.

It was a bold move and not without risks. The new regimen included high doses of several chemotherapy drugs that had major near-term side effects like hair loss, neuropathy and immunosuppression. The long-term potential side effects were even scarier — hearing loss, stunted growth, sterility, heart disease and secondary cancer. But Rory had very few options.

The decision paid off. Rory’s primary tumor and the cancer in her lungs shrank dramatically, and in mid-April she underwent an 11-hour surgery to remove the tumor and her right kidney. It only took her a week to recover, but then it was time for intense radiation and more chemo. 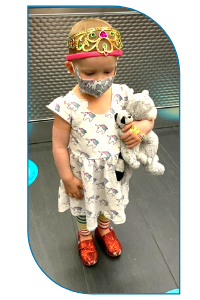 Watching their baby girl go through seven more cycles of chemotherapy was agonizing for Patrick and Lucy. With every cycle, Rory lost her fragile immune system and had the potential for a fatal infection. She was hospitalized five times and was in the ICU for six nights after developing a bacterial infection that sent her into septic shock.

To counteract the devastating effects of the medicine that was saving her life, Rory received nearly 50 transfusions of blood and platelets over the course of her treatment. But the result was well worth it: Rory has now been cancer free for over six months.

“To see Rory today, you’d never know how incredibly sick she was one year ago, or that her treatment ended just six short months ago,” says Lucy. “Now two-and-a-half years old, she is off all regular medication and is growing fabulously. She has the energy and spirit of a girl making up for so much lost time … We are so fortunate to live nearby to such an amazing pediatric hospital, and Rory’s team of doctors and nurses were incredible.”

So many pediatric cancers are still treated with woefully outdated chemotherapies. And, because these cancers are rare, research for new pediatric therapies is severely underfunded, making new drug development and clinical trials extremely difficult to launch.

That’s why UCSF Benioff Children’s Hospitals is working to develop the next generation of cancer therapies for patients with difficult to treat cancers — patients like Rory. An example is UCSF’s Pediatric Cancer Genomics Initiative, which will sequence the DNA of tumors to help doctors understanding their cause at the genetic level and develop tailored therapies for individual patients.

Rory’s family and friends know how important this work is. To date, they have raised nearly $70,000 for UCSF’s Pediatric Cancer Genomics Institute through their “Roar for Rory” campaign.

Give to the Campaign