Stopping a Fatal Blood Disease in the Womb

UC San Francisco researchers safely transplanted a woman’s stem cells into her growing fetus, leading to the live birth of an infant with a normally fatal fetal condition.

An infant who had been critically ill during the second-trimester of pregnancy due to alpha thalassemia, was the first patient enrolled in the world’s first clinical trial using blood stem cells transplanted prior to birth. She was born at UCSF Medical Center at Mission Bay in February 2018, four months after undergoing the transplant to treat the blood disorder, which is caused by a gene carried by nearly 5 percent of the world’s population.

“We are encouraged by how well she and her mother have tolerated this complex treatment,” said Tippi MacKenzie, MD, a pediatric and fetal surgeon at UCSF Benioff Children’s Hospital San Francisco, who performed the pioneering transplant after a decade of research. Normally, women whose fetuses are diagnosed with alpha thalassemia are given a grim prognosis and often terminate the pregnancy due to the low likelihood of a successful birth.

“Her birth suggests that fetal therapy, including fetal transfusions, is a viable option to offer to families with this diagnosis,” MacKenzie said. 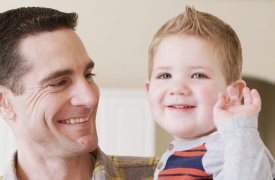 Help us support the kids and families who need us most.
Give Now